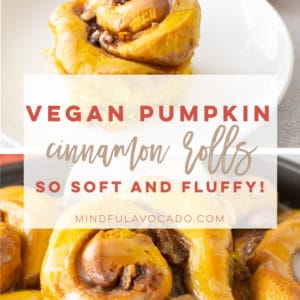 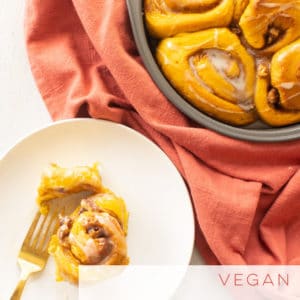 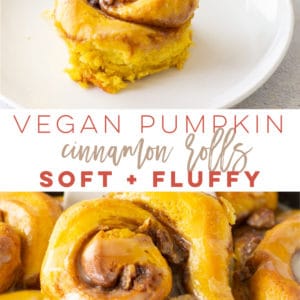 Is there any recipe pumpkin doesn’t belong in?

From oatmeal to ice cream, smoothies, and the obvious pumpkin pie, pumpkin is a Fall favorite (and for good reason)

Brace yourself for these pumpkin cinnamon rolls.

These babies are loaded with pumpkin spice and are so comforting. If making cinnamon rolls scares you, not to worry, we’ll be breaking it down step by step so you can create some foolproof homemade cinnamon buns!

Tips for baking with yeast:

Yeast can be a sensitive thing, but when handled properly, you’ll be a pro at baking with yeast.

How to make pumpkin cinnamon rolls

Alternatively, you can use a stand mixer with a dough hook and knead the dough in there.

How to tell when the dough is ready for cinnamon rolls

The dough will be slightly sticky to touch and bounce back when you press into it. When kneading the dough, it’s important to only add more flour when the dough begins sticking to your hands or the table. If there’s too much flour in the dough, it will be stiff and dry when baked.

Place the kneaded dough into a greased bowl and cover with plastic wrap. Let rise for an hour and it will double in size.

While the dough is rising, make the filling.

I like to mix super soft butter with the cinnamon and sugar to make a spreadable paste. This is effective when filling the rolls because every square inch will be equally covered with filling.

Roll out the dough into a 9″x13″ rectangle and spread the filling. Sprinkle pecans over the top (optional but recommended!) and roll tightly starting by the short side (fig. 3)

Use regular old dental floss to cut the cinnamon rolls into 12 even slices. I prefer floss over a knife because it won’t squish the rolls, causing the filling to spill out!

Place the rolls into a 9″x13″ baking dish or (2) 8″ round cake pans. Let proof for 45 minutes. This second rise step is crucial to achieving massive soft cinnamon rolls!

How long do cinnamon rolls keep?

They can be stored in the fridge for about a week or you can freeze them up to 6 weeks without icing. When ready to eat, heat them up in the oven in a baking dish or wrapped in foil until warm throughout.

Can I make Cinnamon Rolls Ahead of Time?

There’s no way around it, cinnamon rolls are a labor of love and have some lengthy steps. Luckily, you can do some prep work!

Make the dough up to the kneading step and place in a bowl. Put the dough in the fridge for up to 24 hours and bring the dough to room temperature before proceeding.

Make the rolls up to the second proofing step and place the rolls in the fridge (up to 24 hours) or the freezer (up to 6 weeks). When ready to bake, let thaw in the fridge overnight, and bake in the morning for fresh, warm cinnamon rolls!

These pumpkin cinnamon rolls are perfect for holidays, Christmas morning, Fall brunch, or weekend breakfast! They are so comforting, it’s hard to believe they are vegan!

If you tried this vegan cinnamon rolls recipe, let me know in the comments below and share a photo using #mindfulavocado. I’d love to hear from you! Want to see more recipes? Let’s get social! CONNECT WITH ME on Facebook, Twitter, Instagram, or Pinterest to see what I’m currently cooking up! 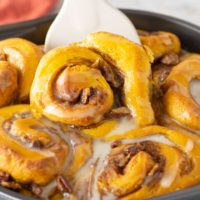 To Make in Advance: