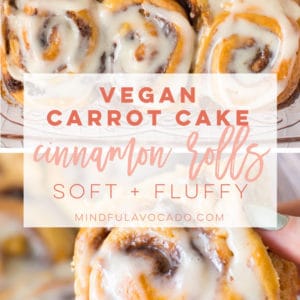 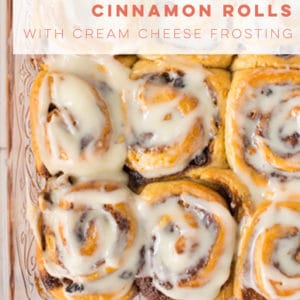 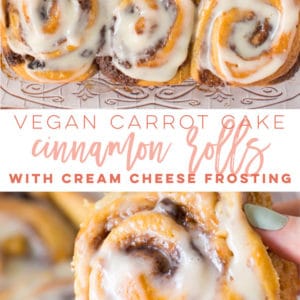 Vegan carrot cake cinnamon rolls featuring a carrot cake dough, buttery brown sugar cinnamon filling adorned with walnuts and raisins, topped with a creamy vegan cream cheese frosting. This recipe is about to score you some major cool points for your next brunch or breakfast!

I may have just broken the internet with this one right here! Just imagine…

In. Every. Single. Bite.

Like holy crap, I think this is my new favorite thing EVER.

Carrot cake is my favorite cake, always has been. And as a child, Cinnabon had my heart. I think I would have been FB official with Cinnabon if that were a thing in the 90s.

Naturally, I had to combine my two favorite loves to make these super delicious carrot cake cinnamon rolls.

Believe it or not, cinnamon rolls are super easy to veganize because the core ingredients are already vegan! Luckily, there are some pretty great substitutes out there for butter and cream cheese to make these vegan cinnamon rolls taste like the real deal.

If you head for the hills when you see a recipe with yeast, just know you are not alone! I researched and tested the heck outta this recipe to provide you with the most intuitive recipe!

For the Carrot Cake Dough:

For the Cinnamon Filling:

For the Dairy-Free Icing:

Not going to lie, cinnamon rolls require some steps, but they are easy to make!

With a little patience, we got this! I mean, the rewards speak for itself 😉

First, let’s wake up the yeast in 3 easy steps:

If it is not, give it some more time. If it still looks like nothing. The yeast is probably dead and you need to try again.

Do not move on with the recipe if you have inactive yeast!

Add the carrots, melted butter, vanilla, and yeast bath into a mixing bowl and give it a good stir.

In a separate bowl, add all the dry ingredients and add the dry to wet. Mix with a rubber spatula until just stirred.

The mixture might look pretty floury but that’s okay! Dump it on a lightly floured surface and knead the dough for 10-15 minutes!

Once your kneaded dough is a nice ball, place in a clean bowl that is coated with a bit of oil. Place plastic wrap over the top and let rise for at least an hour. It should double in size.

Step #3: Prepare and Add the Filling

When the dough is rising, this is the perfect time to make the cinnamon filling!

I use to brush melted butter on with a pastry brush and sprinkle the sugar and cinnamon on top. But after watching a Tasty cinnamon roll video, mixing softened butter with cinnamon is GENIUS.

This technique ensures every nook and cranny have the same amount of cinnamon, sugar, and butter.

Once the dough has risen, punch it and roll out on a floured surface. Use a straight edge to make it as close to a rectangle as possible (mine was 9×13″)

Add the filling and spread with a rubber spatula. You can also add raisins and chopped walnuts (optional of course).

Roll it up! At this step, you can add chopped walnuts and raisins (optional but recommended!)

Be sure to roll it tightly as this will create that beautiful swirl (fig. 3). You can push in the ends as you roll to make sure you have a uniformly sized log.

Now here we use dental floss (fig. 4) to cut the dough. This works far better than a knife as it doesn’t squish the dough. You should have about 12 rolls.

(And I won’t tell your dentist if you use more dental floss for cinnamon roll making than on your teeth!)

Okay, THIS STEP RIGHT HERE is an important one! It’s called the second rise. The photo on the left is right after cutting, the image on the right is 45 minutes later. Those are still uncooked but they had a second proof. If you skimp on this step, your rolls will not be big and fluffy.

If you want to make these vegan cinnamon rolls in advance, nows a good time to cover and let sit in the fridge overnight or even put in the freezer for when you’re ready to bake!

Simply whisk all vegan cream cheese ( I like Daiya or Kite Hill), powdered sugar, vanilla, and melted butter together. Add a small about of almond milk until a nice icing consistency is reached.

Adjust the powdered sugar or butter if you want it thicker, add more almond milk to thin out.

Once the rolls are out of the oven and cooled, add some frosting and DEVOUR!

Carrot cake is not for just cake no more! These cinnamon rolls are here to stay! And I’m totally okay with that.

These vegan carrot cake cinnamon rolls are perfect for Easter, Mother’s Day, birthdays, baby showers, brunch, or just any ol’ breakfast! Heck, breakfast, lunch, and dinner if you ask me!

How do you make overnight cinnamon rolls?

Roll, slice, and transfer the 12 rolls to a greased baking dish. Cover the dish and keep in the fridge overnight. Then let the pan sit out for a few minutes at room temperature before baking.

You can prepare the icing ahead, too! Once you whisk it up, transfer to an airtight container and keep in the fridge for a day or so. Then let come to room temperature and give it a good stir before slathering on the baked rolls.

Can you freeze vegan cinnamon rolls?

Yesss! These are fabulous to make ahead and freeze for up to 6 months. I recommend placing the unbaked rolls in an aluminum pan and covering with a layer of tin foil. Then bake thawed or from frozen right in the same pan. (You’ll just need to add a few extra minutes if baking from frozen.)

Once the rolls are baked and iced, they keep well for about 1 week in the fridge. Store the cinnamon rolls in an airtight container to keep them from drying out.

(Speaking of drying out…I don’t recommend that you freeze once they’ve been baked. Baked, frozen, and reheated carrot cake cinnamon rolls just don’t have the same great texture and flavor.)

To reheat, microwave each roll individually at 50% power in short 10-second bursts.

You can also warm them up in a 350 degree oven for 5-10 minutes. Give them a check after 5 minutes to make sure the frosting doesn’t ooze everywhere.

If you tried this vegan cinnamon roll recipe, let me know in the comments below and share a photo using #mindfulavocado. I’d love to hear from you! Want to see more recipes? Let’s get social! CONNECT WITH ME on Facebook, Twitter, Instagram, or Pinterest to see what I’m currently cooking up!

If you want more vegan breakfast recipes, check out: 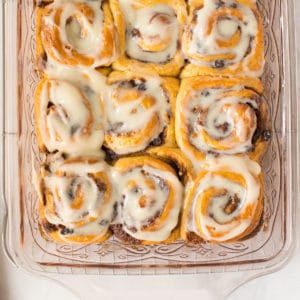