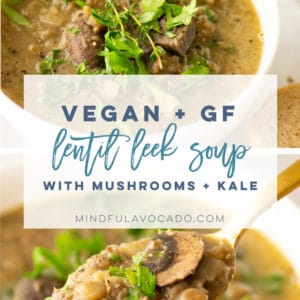 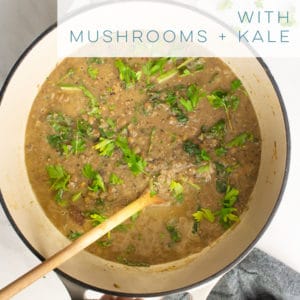 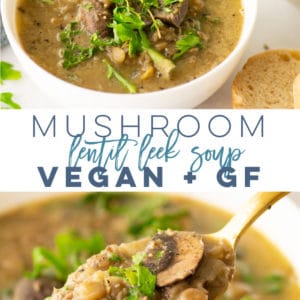 Lentil leek soup – say that ten times fast! Lentils, leeks, mushrooms, and kale are just pure magic when unified. In addition, we have fresh rosemary and shallots! Still not convinced? This vegan soup recipe can be made with 10 ingredients and just shy of 45 minutes.

This post was originally published in February 2017. New photos, writing, and recipe have been updated.

Soups are a great way to meal prep because you can have leftovers for days. Unlike most leftovers, soups get better a day or two later because the flavors just mend together.

This lentil leek soup is vegan, gluten-free, yet oh so comforting. See why this soup is a must-try:

Now that I have your attention this vegan soup recipe is a must! It’s super healthy and filling, but leaves room for a little bit of bread on the side 😉 Keep reading to see how it’s done.

What is a leek?

A leek is a vegetable that has a milder taste of an onion. Only using the white and light green part, it can be chopped up and used as a soup starter just as you would with onions.

How to cut a leek

This video might be useful to see how to chop leeks!

How to make lentil leek soup

I like to think of soups as layers. It’s all about adding ingredients at the right time to achieve the perfect end result.

What to serve with lentil leek soup

Bread is always a good option or a simple light green salad would pair nicely.

But for real, warm crusty bread will make this one heck of a meal! If you’re feeling really fancy, make a batch of vegan rosemary biscuits. You will have no regrets.

Does this soup freeze well?

It sure does! All the ingredients in this soup are freezer-friendly. Just put leftovers in a freezer-safe bag or container and it’ll keep for up to 6 months.

If you tried this vegan lentil leek soup, let me know in the comments below and share a photo using #mindfulavocado. I’d love to hear from you! Want to see more recipes? Let’s get social! CONNECT WITH ME on Facebook, Twitter, Instagram, or Pinterest to see what I’m currently cooking up! 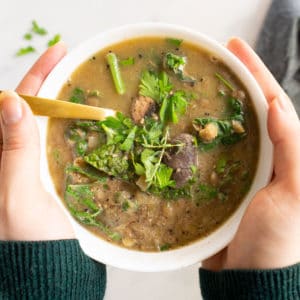 22 thoughts on “Lentil Leek Soup with Mushrooms and Kale”