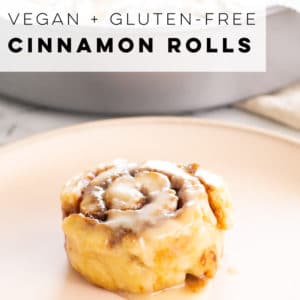 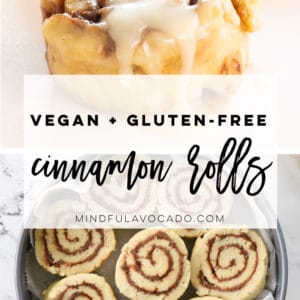 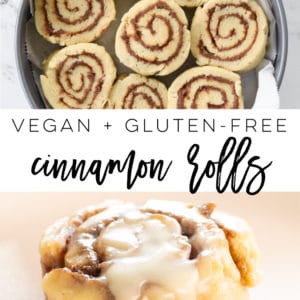 This post is sponsored by Bob’s Red Mill. All opinions are my own!

I’m a big-time cinnamon roll fan. From a classic cinnamon roll to fun flavors like carrot cake, it’s safe to say they are a favorite of mine.

This recipe was a challenge for me because it is gluten-free! Now typically cinnamon rolls depend on that gluten to get a nice rise.

So what’s the secret?

This pizza dough kit works wonders in cinnamon rolls because the blend is made to work with yeast. PLUS the kit includes a packet of yeast! Most GF flour blends out there don’t include enough ingredients to react with yeast like we need it to. Until now, my friends!

How to wake up the yeast

The very first thing I like to do when baking with yeast is wake it up. Nothing is worse than making a recipe and when you give it time to rise, it makes no movement.

A way you can fix that is by waking up the yeast first. It ensures it’s alive and ready to be used in a recipe.

Ok, so how do we wake up the yeast

In the images above, the dough on the left is pre-proofing and on the right is after 1 hour.

This is my favorite technique when it comes to cinnamon roll making!

You want to work with very soft butter (in our case vegan butter!) to make a smooth, yet spreadable mixture.

I prefer this method over brushing melted butter and sprinkling a cinnamon-sugar mixture on top of the dough because it ensures every area has an equal amount of butter, sugar, and cinnamon!

Now it’s time to get rolling!

Note: You will get some cracking in the dough when rolling. That’s just the nature of gluten-free rolls. However, the pizza dough kit is the BEST gluten-free solution I’ve ever tried and feels the closest to working with all-purpose flour.

Place the rolls in a parchment paper-lined pan, cover, and let sit for 45 minutes for one last proof.

Once that’s complete, it’s time to bake! Put the rolls in a preheated oven for 30-35 minutes.

How to make icing for cinnamon rolls

While the rolls are proofing and baking, it’s time to make the final touch – icing!

Whisk together the powdered sugar, vanilla, melted butter, and milk until a nice smooth consistency is made.

Tip: If there are clumps in your icing from the powdered sugar, you can put the icing in the microwave for about 15 seconds then whisk again. This should vanish all the clumps!

Note: Not all powdered sugar is vegan! Try looking for an organic brand as this will ensure it’s vegan.

How to store cinnamon roll leftovers

Leftovers keep in the fridge for about a week.

To reheat, use the microwave or place one on some foil and bake it in a 350F oven for 10 minutes or until heated through.

Can you freeze cinnamon rolls?

Yes! The best way to freeze cinnamon rolls is before baking. Here’s my recommended method:

If you tried these vegan and gluten-free cinnamon rolls, let me know in the comments below and share a photo using #mindfulavocado. I’d love to hear from you! Want to see more recipes? Let’s get social! CONNECT WITH ME on Facebook, Twitter, Instagram, or Pinterest to see what I’m currently cooking up!

If you like this vegan cinnamon roll recipe, then you’ll LOVE: 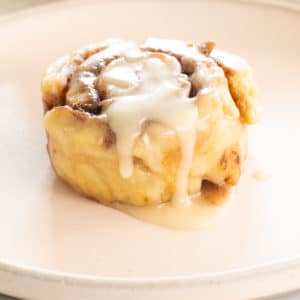 To Make the Dough:

To Make the Filling:

To Make the Icing: