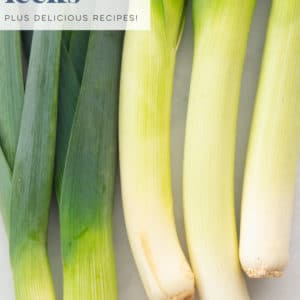 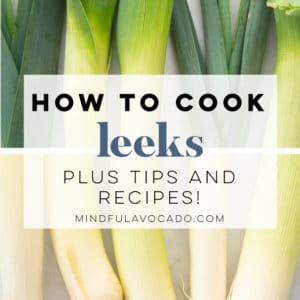 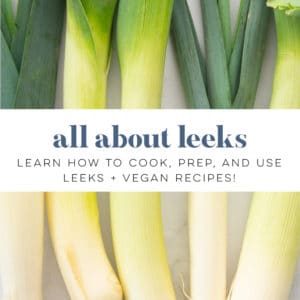 How to Cook Leeks – Like an onion but a bit sweeter, lovable leeks are a delicious veggie to include in any number of vegan recipes. Even though they are super easy to prepare, leeks seem to make dishes feel extra special with their wonderfully fresh and earthy flavor.

Here you’ll find all you need to know about leeks…tips for picking the best bunch and how to prepare, plus some of our favorite recipes that feature this fancy member of the onion family!

HOW TO CHOOSE THE BEST LEEKS TO COOK

First off, it is important to know that leeks are a kind of onion, similar to green spring onions, but much larger. They have a sharp flavor like a green onion, but because they are much larger and grow to be more mature, leeks are slightly sweeter and even more vibrant.

Leeks are most often harvested in late winter or early spring. However, because of their popularity you can usually find them year-round in nearly every grocery store.

When fresh, they have a firm white stalk and hearty green tops. Avoid leeks that are rubbery or too soft, or have tops that are mushy. 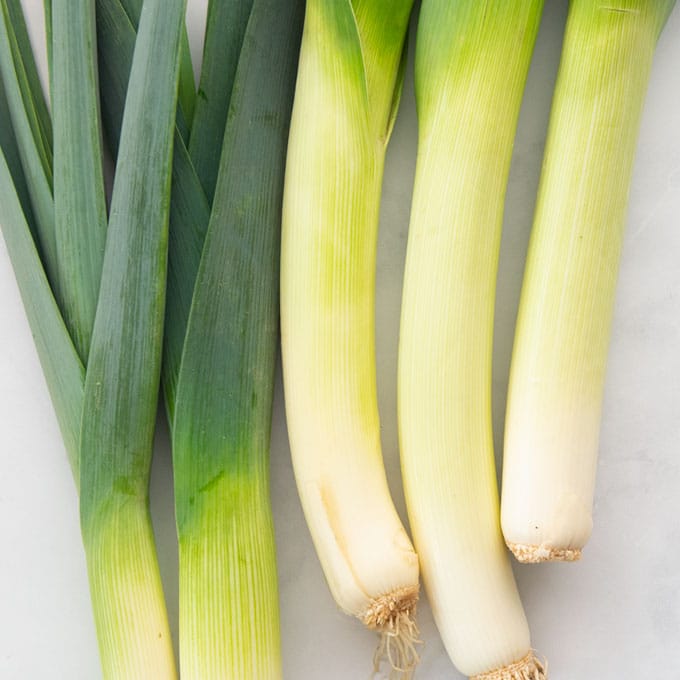 Raw leeks will stay fresh in the refrigerator for about a week or two. The best way to store them is to keep them whole and unwashed, and wrapped in a damp paper towel. Place the wrapped leeks in a plastic bag and keep in the crisper drawer of the fridge for maximum freshness. 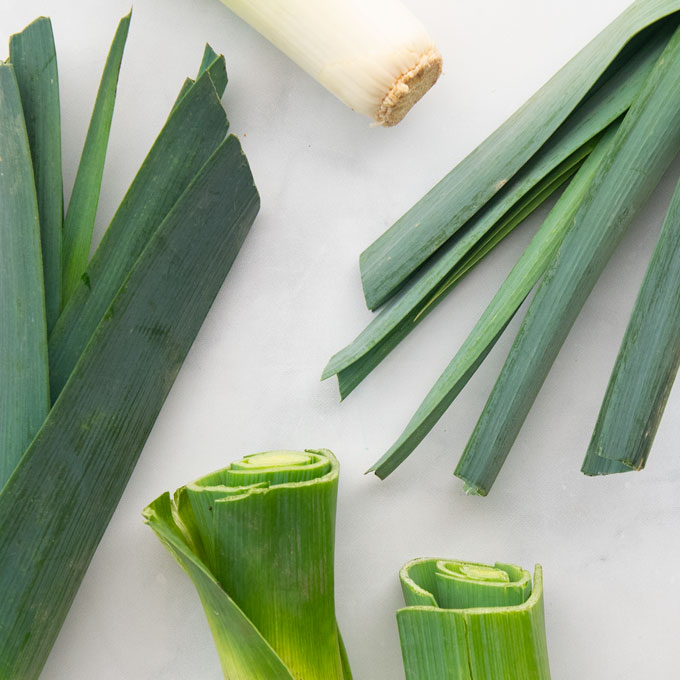 WHAT PART OF THE LEEK IS EDIBLE?

Technically, the whole thing is edible. But what part of the leek actually tastes good? Most recipes use the light green lower part of the leek, just above the white bulb. This section has the sweetest flavor and great crunch.

The dark green tops are not the same as spring onions, however, they can still be used for cooking. While green onion tops are yummy to slice and include fresh on foods as a garnish, the green part of leeks are best when cooked and included in the recipe, like in stir-fry dishes and vegan quiches. 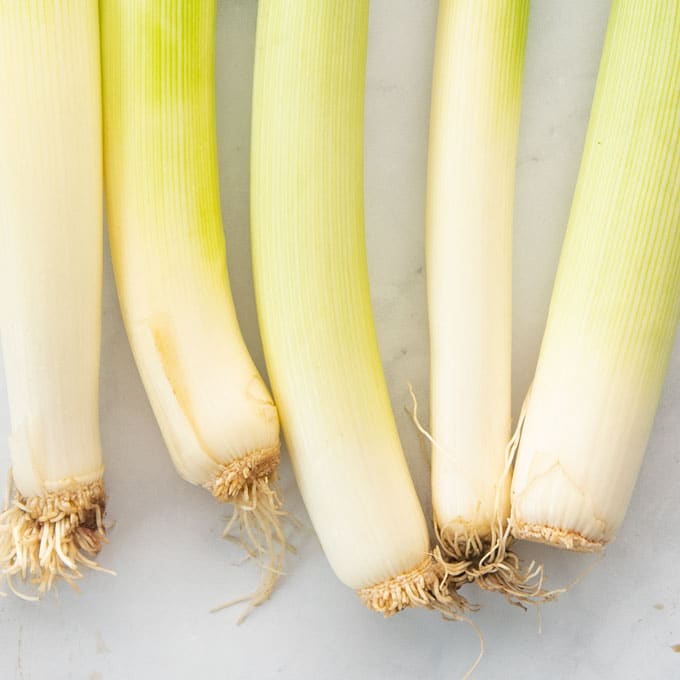 TIPS FOR HOW TO CUT, PREPARE, AND PRESERVE LEEKS

Once cut and rinsed, raw leeks should be used right away for maximum freshness. If you do need to refrigerate, place the pieces in a sealed container for up to 2-3 days.

To preserve leeks for even longer, it is recommended that you first blanch and then freeze them. Slice and rinse the leeks as described above before cooking them briefly into a pot of boiling salted water. Then plunge them into an ice bath to stop the cooking process. Transfer the blanched leeks to a paper towel to dry, and seal in an airtight bag to freeze. They will keep well for about 3 months in the freezer, and can be cooked from frozen like other frozen veggies. 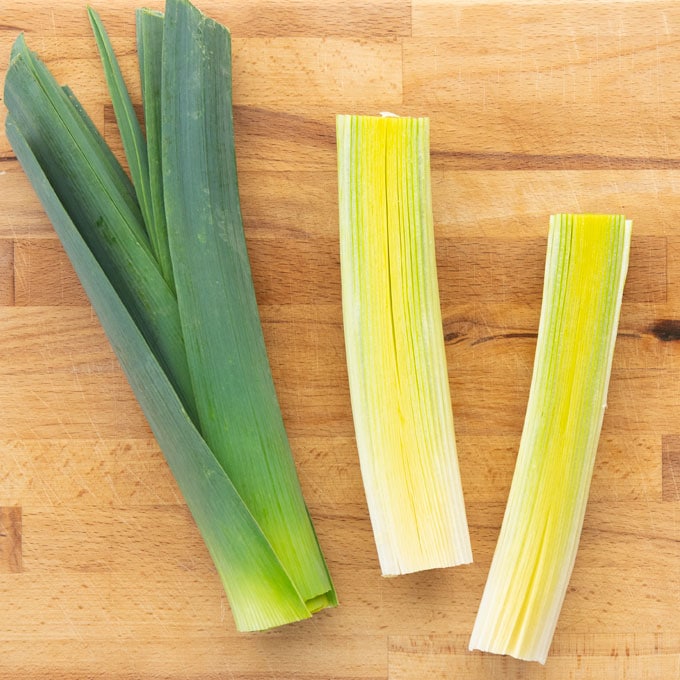 HOW TO COOK LEEKS: RECOMMENDED VEGAN LEEK RECIPES TO TRY

From breakfasts and brunches to healthy and satisfying lunches and dinners, sweet and earthy leeks are delicious to include in many fabulous recipes!

If you are looking for ideas of how to cook leeks that everyone at your table will love, try: 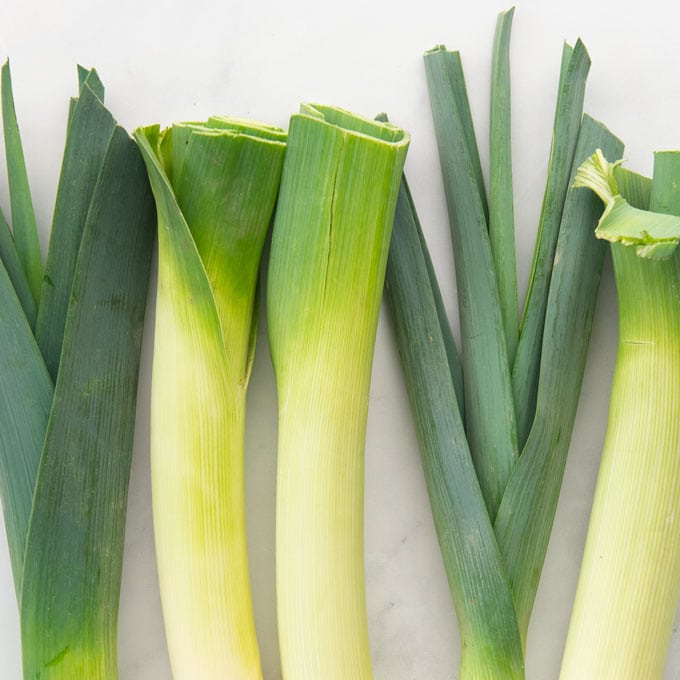 What do you love about leeks? Let me know in the comments below!